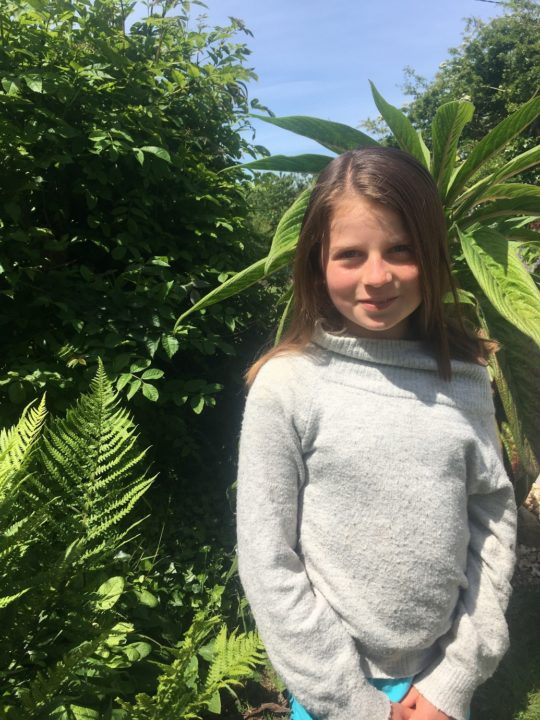 She loves creative writing, especially when she can use an old-fashioned typewriter that used to belong to her mum, as she can take it in the garden to write.

She also loves her black cat, Binx, as well as looking after her chickens and the family guinea pig. In fact, she is a fan of all animals and would like to be a zoologist one day. Her dream is to visit Madagascar to see ring-tailed lemurs in the wild. She has even adopted one from the Durrell Wildlife Conservation Trust; his name is Stumpy.

She is so pleased to have won this competition with The Writers’ Block.

Jaffa, a ring-tailed lemur with a thick, gleaming coat and a super-stripy tail, was sitting on his favourite branch of the baobab tree.  As he gazed up at the paradise birds, he thought how beautiful the forest looked that day. The blue bees made the bright trees magically glow, whilst the huge leaves created an oasis of green.

Suddenly, the whole forest reacted to a terrifying CRASH! There was an enormous yellow monster with a huge silver claw heading straight for them.

It was tearing down the great big trees that the parrots liked to nest in; their precious eggs were being smashed on the ground. Jaffa watched in horror as hundreds of years of growing were gobbled up in seconds.

The howler monkeys were woken up from their deep sleep by the blazing, hot sun bursting into the protection of the rainforest and landing on their hairy backs. Fleas jumped off them like rats fleeing a sinking ship.

The mouse-lemurs were pelted by the falling coconuts as they were ripped from the trees.

Jaffa could see a crumpled, brown figure lying on the floor; he went down to investigate. It was his old friend, Mr Pebble, the aye-aye. Jaffa wept.

Hours later, the chaos moved on but with all of the beautiful trees swallowed up and taken away by the hungry thief.

Jaffa was one of the only survivors but he was left with nothing and his home was completely gone. He looked out to the unknown rainforest that was once his home. How was he supposed to live with nothing left? He was empty. He was angry! Why would someone steal their home like this?

Jaffa struggled on for two days until he realised he needed to go to rest and fade away. Just then, on the edge of the clearing, he noticed a figure. It wasn’t an animal; it was a man! Jaffa wanted to run away but he had no energy left.  The petrified lemur curled up into a tiny ball and waited. Something sharp hit him and he blacked out.

The next thing he knew, he was awake and well, but trapped in a cage. The man loomed over his cute and scared little face. Jaffa thought he would be killed at any moment, as he was lifted into the back of a jeep.

Then, he heard a voice murmur, “There you are, little fella.”

He was awake in heaven, he thought, but he recognised the sweet smell of bananas and the man was still there so he couldn’t be in heaven! He was back – but in a part of the jungle that had not been destroyed by the monster.

“I’ll help you build back your rainforest,” the man said.

And from that day forward, Jaffa and the man were best of friends. Jaffa learnt the man’s name, Kevin, but he preferred “The Man” because he was the man of the jungle who saved his life.