Ian Falconer started the company Fishy Filaments in 2016, a year later he was awarded special funding to continue realising his vision. Subsequently, Ian told us that he has been able to supply, “over 200 different people and over 100 different companies’’. Fishy Filaments based in Newlyn Harbour, using recycled fishing nets for a myriad of different purposes and functions.

This is exemplified by the Fishy Filaments method of breaking down the old fishing nets into a material used for 3D printing. As well as for the global companies, Fishy Filaments produce buttons for clothing designer Ella Griffee who is based in Cornwall. Ella uses the buttons for her fully sustainable clothing company. Ella Griffee Studio prides itself on offering an antidote, “alternative to fast fashion”. The fabrics chiefly used by Ella Griffee Studio is the deadstock linen discarded by larger companies. This original and ethical reuse of discarded products makes for perfect pairing with a company such as Fishy Filaments.

Buttons made by Fishy Filaments for Ella Griffee Studio

Crucially, Ian works directly with the commercial fishing industry. The fishing nets are given to Ian straight from the fisherman after their use with them. After seeing the impact of plastic waste on the environment, especially the sea, Ian decided to set up the company. This began a new relationship between the local fisherman, Ian and the sea.

Currently, Ian is the only full-time employee of Fishy Filaments as the company is still in its early stages. The company does not require many people to run the operation or any specialists for any equipment. However, Fishy Filaments are looking to transition from a research and development company into a large-scale recycling company. Watch this space and what can be done with discarded plastic! 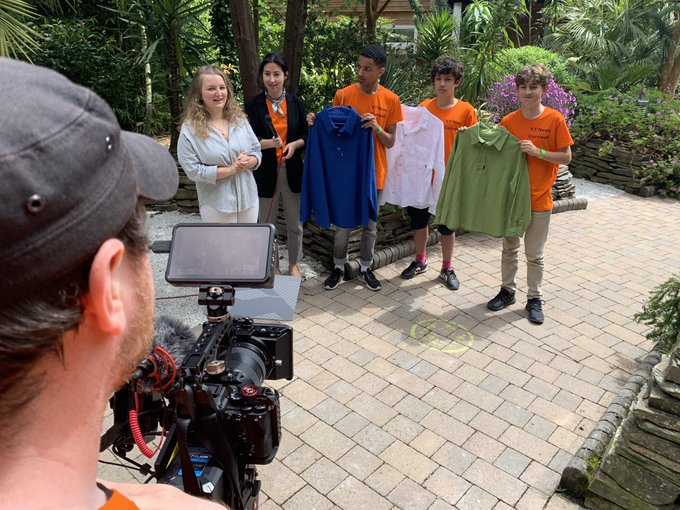 Shirts made by Ella Griffee Studio