Falmouth Paddle Out for the Ocean

On Saturday the 12th June, approximately 1000 people joined the Surface Against Sewage ‘Paddle out’, to give the Ocean a voice and warn people and the G7 delegates that the sea and sea creatures are struggling to survive amidst plastic waste and pollution.

Y7 Young Journalists Mya and Jasmine joined the paddle out at 10:30 am, where people on surfboards, paddleboards, boats, and kayaks flocked to the sea at Gylly Beach to show solidarity in the fight against climate change. The atmosphere was electric, with ocean activists as young as 3 to much older cheering, singing, and making as much noise as possible by hitting their boards, clapping their hands, and whistling. People were dressed up, wearing cone hats and netting. Banners and boards displayed passionate messages urging a change in behaviour from governments and people, reading “” and “”. An inflatable shark even joined the protest, with “Eat people not plastic” written on it to show that sea creatures often dine on man-made products which do not belong in the sea.

As everyone chanted “Oggy, oggy, oggy” and “Save Our Seas”, protesters proved that Cornish people care about our Oceans. A Mexican wave was even started, with everyone engaging furthermore accentuating the level of cameraderie of all who attended. We interviewed three protesters holding a banner reading “I like my Pasty’s hot, not my planet” who wanted the protest to show the government that change needs to happen now, and not later. They said that they have had a front-row seat to the effects of plastic usage and pollution, witnessing plastic packaging in the sea, which one does not expect to see when entering the realm of the Poseidon.  They loved seeing the expansive turnout and hope that it proves to delegates and the general society alike that people care about the ocean and our planet. 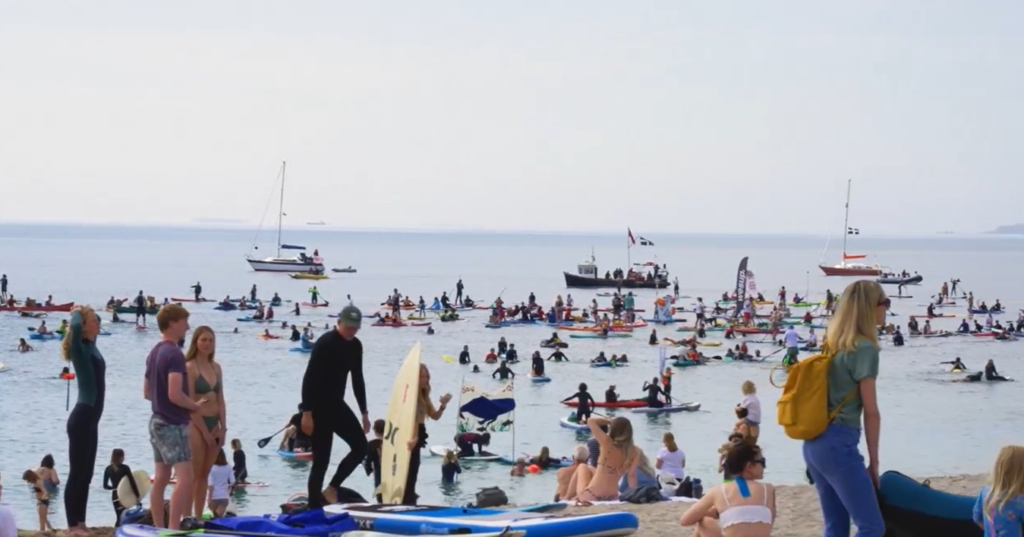 Meanwhile, back on land, Elodie and Rosie interviewed a multitude of people, ranging from protesters and residents to the director of the harrowing Netflix documentary ‘Seaspiracy’. The excitement for the event was translated on the beach, with the Chief Executive of Surface Against Sewage, Hugo, saying that “We wanted to make a load noise to the world leaders about the need to restore and protect our oceans”. The planning process has taken several weeks, with people from all over the UK coming to Cornwall to show their allegiance with our oceans. In an interview with Finely, a younger boy who came from the north of Scotland to take part in the paddle-out and other climate change protests. Finely, who is also a Sea Shepard ambassador said that “Hopefully this will happen with some concrete action from the G7” and reiterating that “we don’t want empty promises and empty summits”. Unlike some of the excessive transport methods chosen by the delegates, Finely was proud to emphasise that his long drive from Scotland was made with an electric car.

The event was even attended by Ali Tabrizi, the director of the `Netflix Documentary ‘Seaspiracy’ which aimed to expose the environmental impact of fishing and raising awareness of the human impact on marine life. He praised the protest, telling Elodie and Rosie “I like to see positive activism… doing something fun for the ocean”. As well as showing his appreciation to the extensive turnout for the protest, with infants and elders alike showing their passion for saving the sea, he told us what he would like the world leaders to prioritise at this year’s G7 summit. Ali said that there should “30% more of our oceans should be no take zones by 2030” and told our journalists that his crowdfunding page ‘crowdfunder.co.uk/30by30’ aims to make this financially possible. His final message to the delegates and the public is to “keep this conversation going”.

Overall, the general consensus was that this protest was not only a way to show what joy the ocean can provide when you treat it with respect, but a way to remind the delegates that people are passionate about saving the sea. Surface against sewage want action now, not tomorrow, to protect our futures and the future of the sea.