Ideas from the Attic – Exhibition Review

Following on from ‘Ideas from the Attic’ in 2018 where we shared and celebrated the extraordinary work space that had been created by the late Bill Mitchell, artistic director of Wildworks Theatre Company, we decided to commission 3 creative practitioners to respond to Bill’s Attic in their chosen medium.  These were writer Wyl Menmuir, graphic artist Keith Sparrow and painter Melanie Young.  Artist and curator Tony Crosby then created a mini exhibition for Ideas from the Attic 2 placing the artworks by objects, sketchbooks, textbooks and music that had inspired them.

Inspired by books, model boats, postcards and music from Bill’s Attic, Liner Notes tells the story of an album that has not yet been recorded. It takes the form of liner notes on a 12” LP for an album titled ‘The Offshore Sessions’, an improvisational jazz workshop that will take place in the hold of a repurposed picket boat in the Carrick Roads. The notes themselves are written by an associate of the album’s sound recordist, following the disappearance of both the musicians and the sound recordist himself. 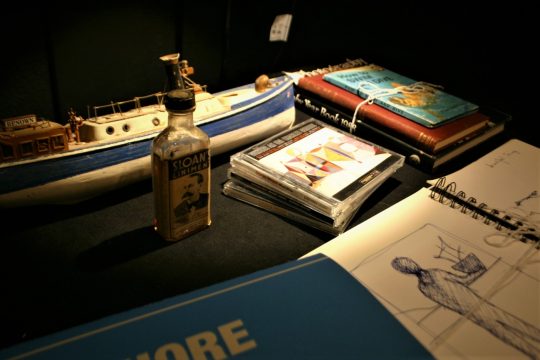 Tales from The Attic

I didn’t know Bill very well. I’d met him for the first time when we were planning the Writer’s Block and I was happy to get the chance to see his amazing attic during that process. What struck me then, and on my subsequent visit for this project, was that he encapsulated the idea of an animateur, someone who brings life to ideas and encourages creative thinking. The attic is so full of life and the pleasure he took in creating new life from inanimate objects. It was his magnifying glass in particular that struck me, the thought of him sitting there, crouched over, peering into a miniature world that he created with delicate hands. I imagined all those bizarre characters he made being bought to life with minds clean and free of ideas – what would they say? Well I guess they might say what humans still ask themselves…the big questions that we never quite find the answers to. But the answer isn’t the point, is it?  No, it’s the search itself, the wondering, the questioning.

My mind went (as it often does, no apologies) back to comics, and in particular the legendary EC comics of the 1950s. Those EC comics were an explosion of creative writing and drawing, they challenged and threatened the cosy static world of post-war America and led ultimately to the suppression and sanitisation of the art form, something which lasted until the late 80s-early 90s. There was also a character in an early Spider-Man comic called the Tinkerer that was in my mind.  A quiet man who sat in a dimly-lit workshop tinkering away, making odd-looking contraptions to attack Spider-Man. He turned out to be an alien if I remember, but I digress!

I decided to do an homage to an EC comic called ‘Tales from The Crypt’. The piece entitled ‘Tales from the Attic’ is a faithful revisioning of a typical cover from that period, using several characters I sketched in Bill’s attic and featuring his magnifying glass. I gave them names and voices as I saw fit. The character under the glass with the crocodile on a shield intrigued me – It appears to be a small found object rather than something Bill made but it’s typical of what he would find fascinating, I think. (The name ‘Gwrier’ is actually a Cornish word for ‘maker’, or ‘manufacturer’ if you’re interested. According to the MAGA online Cornish dictionary). The second page is how a typical opening story page of that EC comic would look, with a brief text introduction, large summary picture and a small inset picture kicking off the story. Again the two characters shown are from Bill’s attic.

So these two drawings are my attempt to take a little piece of Bill’s work and give them voices, gently nudge them along to the next stage of life maybe. Every voice deserves to be heard. 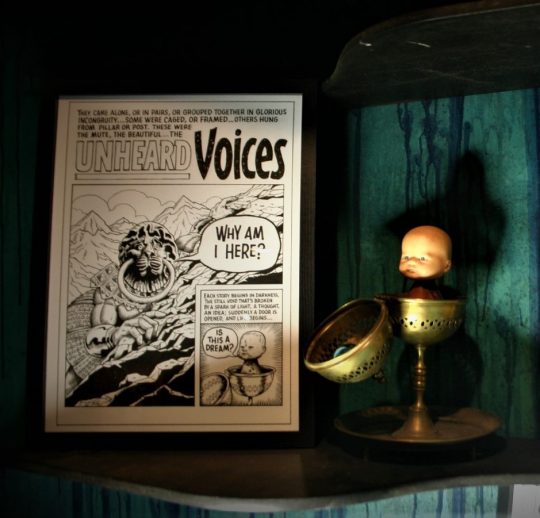 Treatment no 36, The Happiness Project

The painting ‘Treatment no 36, The Happiness Project’ is a response to images and ideas found in Bill’s sketchbooks. Being in the Attic is a slightly overwhelming experience which I have filtered into the work you see.

Discovering through the paint surface, something half forgotten, my personal practice as a visual artist explores memories both recent and distant. I cover then reveal a figure often standing in for myself. The work addresses life-changing events in a way that is both playful and idiosyncratic. Recently I have returned to a more experimental way of working, playing with images that are both immediate and primal.

I am currently collaborating with Dance artist Caroline Schanche on a performance installation. This work ‘We Are Splendid’ explores the stages of grief through film, text, movement and image and is due to be performed in museum spaces in Cornwall later this year.

The Attic has been an inspiration for both ‘We Are Splendid’ and the painting on show. Both myself and Caroline were invited to visit Bill’s Attic last year and spent a day absorbed in his mountain of sketchbooks. I was invited again for the creation of this painting and enjoyed just spending time absorbing the contents of Bill’s world. 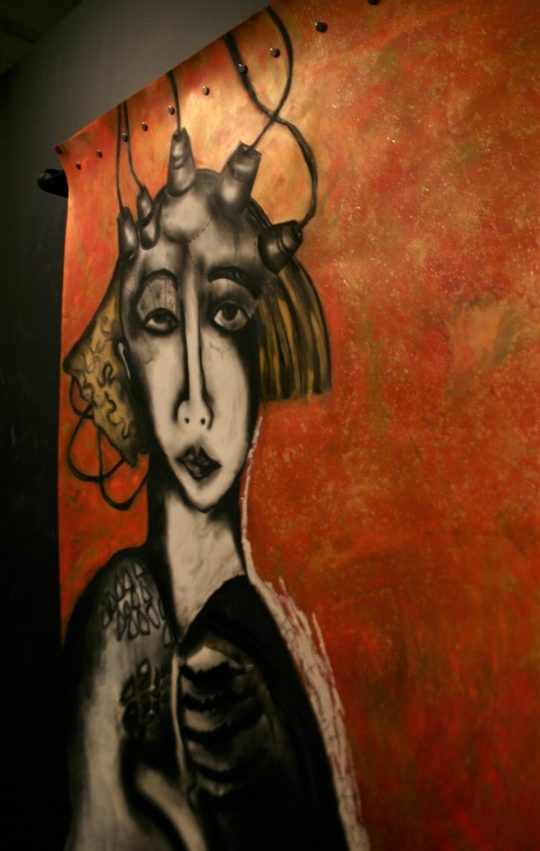