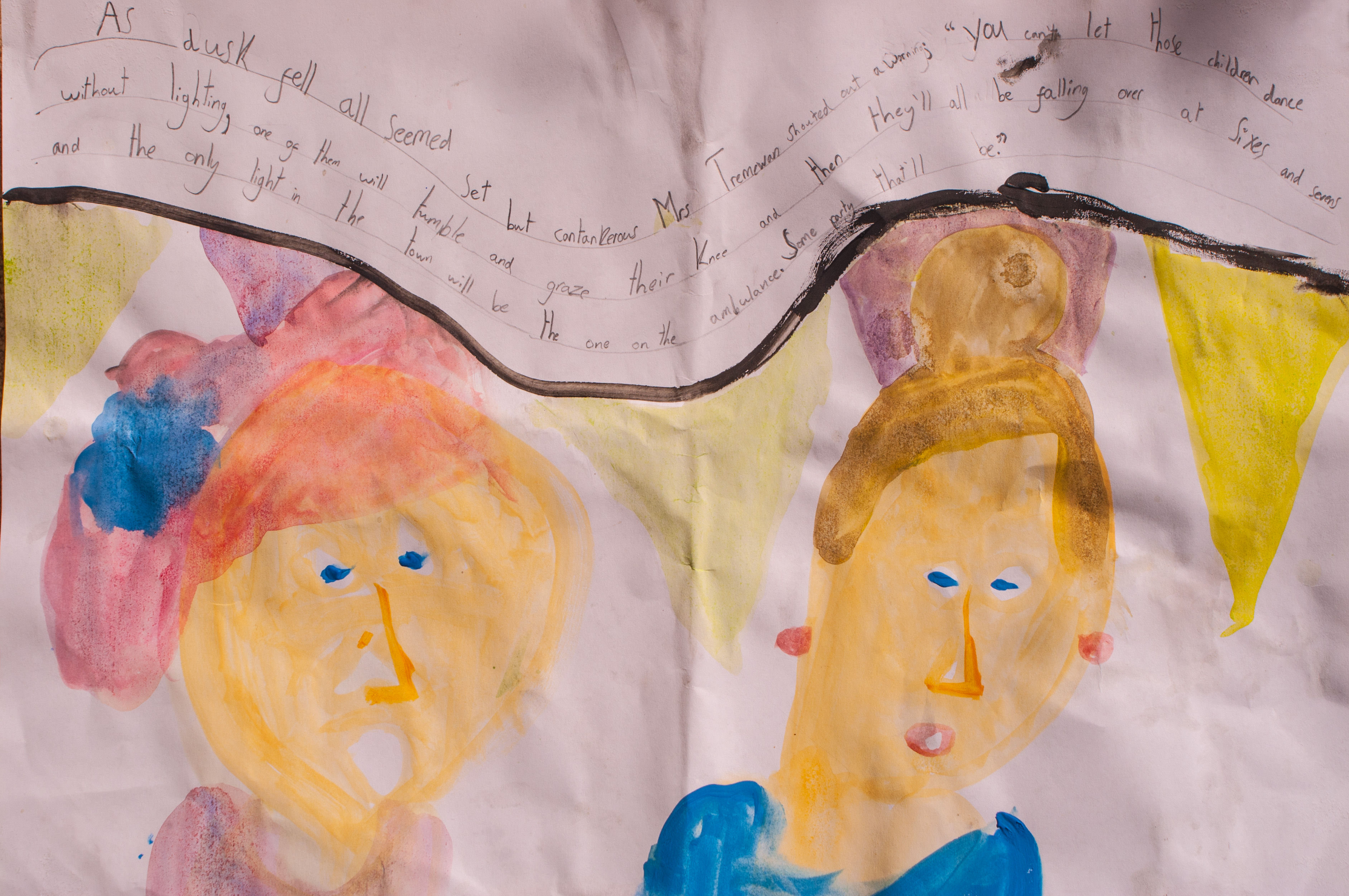 One misty morning a little girl named Irene peered through her curtains, the street lamps were still on. All she saw was a glimpse of four figures standing underneath the old town clock. They opened some books and began to sing.

Eighty years later on another misty morning, a little girl named Millie peered through her curtains. The town’s lamplights had long since broken but she could just make out eight figures standing underneath the old town clock. She ran down the stairs, zipped up her coat and skipped outside. Millie realised her mistake, four of them were just the town’s grey statues. The four real people wore colourful outfits and sparkles in their eyes. The two ladies wore high heels, dainty dresses and lots of luscious lipstick, the men had moustaches, highly shined shoes and each held an old fashioned suitcase.

“Who are you?” asked Millie.

“We are the Story Republicans” they said, we gather stories from each town and then we come back when the stories need telling again so that they are never forgotten. They opened their books and began to sing; ‘Little eyes I love you…’

“I’ll go and get my grandmother” said Millie and she ran off. When they returned, Millie’s grandmother, Irene, gasped with delight ‘I remember them, it’s the people from the statues! Oh, I must fetch Bertie”.

When Irene got to Bertie’s house, the door was locked and all the curtains were closed. Irene rang the big doorbell which was covered in cobwebs, it tolled in the porch-way. There was no reply. No light came on. She was very disappointed.

Bertie was sitting in his armchair, smoking his pipe and grumbling away when there really wasn’t anything to grumble about. When the bell rang, he was startled, then surprised, then annoyed and finally curious enough to rouse from his comfortable chair. He took time fumbling for his stick and keys. Irene was still there, patiently waiting. She explained to Bertie what was what, she invited him to accompany her to the town square to listen to The Story Republicans again as they had when they were little.

In the square, quite a crowd had gathered. Irene made her way through the crowd. “Where’s Mr. Thomas?” asked Millie.

After a few tales, the Story Republicans burst into ‘Cornish Lads’ and led the crowd right to Bertie’s door. They set down their cases and began to tell the tale of their first visit to the town, when Irene and Bertie were just a little girl and boy. Irene noticed Bertie’s door handle slowly turning, she went to join him as he appeared on the front porch. The story came to a close. For a moment, the crowd began to walk slowly back down the hill but Millie called out and suggested they should have a celebration. Everyone agreed. The school children ran to fetch their instruments and kitchen tables and chairs were carried out into the square.

As dusk fell, all seemed set, but cantankerous Mrs Tremewan shouted out a warning;

‘you can’t let those children dance without lighting, one of them will tumble and graze their knee and then they’ll all be falling over at sixes and sevens and the only light in the town will be the one on the ambulance and some party that’ll be.’

Just then, the town’s ancient street lamps came back on like a set of starry dominoes. “Hurrah!” They all shouted, and the band began to play. Bertie came walking around the corner with a spring in his step, smiling from ear to ear with a toolbox in his hand looking some twenty years younger.

A while later, when Bertie and Irene were gently waltzing in the lamplight, Millie smiled and watched the Story Republicans slipping away quietly, cases in hand. No-one knew where they had come from, nor where they were going, but the town… had changed.