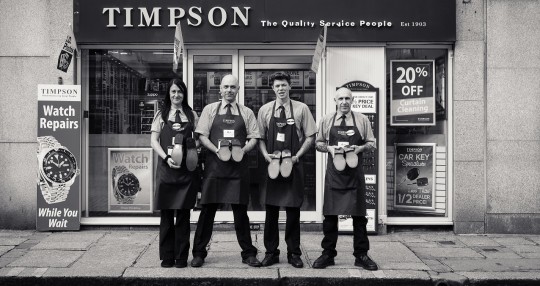 Taken from the archives of ‘The Truro Tattle’ in which the celebrated but now sadly defunct newspaper sent its most earnest reporter, Noah Goodyarn, behind the shop counters of Truro to seek the truth about the city and its people from the trader’s point of view. No.13: ‘The Cobbler’.

Noah: ‘So, Mr. Timpson, what has mending the footwear of the good people of Truro taught you about life?’

I can tell a lot about a person from their shoes

Some limp, some scuff

But tisn’t only the way they dawdle or race

Their shoes is as tellin’ to me as their face.

‘Fascinating. Would you say Truro was, on the whole, a well-mannered and refined community?’

Take as a case that farmer in boots.

He comes in my shop, he don’t give two hoots

Covered in wotsit, I swear to you now,

He might as well bring in the whole bloomin’ cow

Pulls ‘em right off and asks me ‘ow much?

You wouldn’t believe what some people expect me to touch.

‘How very revealing. What can you tell us about the youth of today?’

There’s Kate and her gait, she’s a lesson for all

Her sky high stilettos, how can she dance?

Her dear little feet, they don’t stand a chance

But I can’t mind how I feel about tottering heels

‘Cos I’ve mended enough for a lifetime of meals.

‘Illuminating. And what of the difference between the sexes?

Men, you see, they’re not sentimental

They’d rather be dull than not pay the rental

So ‘tis leather for they, and proper job soles

But women, they don’t fuss ‘bout a few little holes

Colour they favour, and texture and bows

Never mind if in days you can point at their toes.

‘A valuable insight. And finally, I see you have many pairs of shoes yet to mend. Do you work alone?’

‘No, I’ve got a workshop of elves out the back, what d’you think?

Now if you’ll excuse me…’

* For the full story of how The Truro Tattle came to its untimely end, see the West Briton archive of the following week entitled ‘Goodyarn Duped By Fake Elves’.