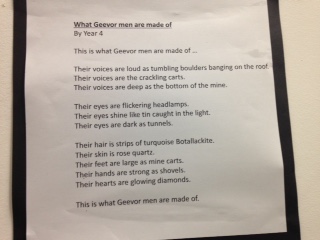 Old Stories, New Voices’ was a powerful project which brought together the stories of ex-Geevor miners and the ears, pens and voices of local primary school children. As the writer on the project I began by prepping the children to interview the miners. Straightaway, I was struck by the breadth of their prior knowledge and their enthusiasm for the subject matter. The miners who visited gave so generously of their time and answered the children’s questions thoughtfully and informatively. After these inspiring sessions the children needed little prompting in writing heartfelt poetry full of detail and vitality.

The children, guided by Christine Judge, then began to compose melodies and set these poems to music. Along with these class songs, the whole school was involved in learning Cornish language songs and rousing mining chants. The project culminated with a celebration of song, performance and displayed work at Pendeen Church and the Mining Chapel in St. Just. Both events, performed superbly by the children, were attended by the family members, people from the local communities and the Geevor miners themselves. 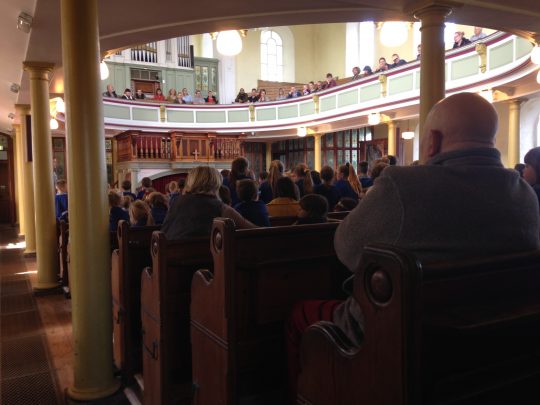 Ultimately, the children needed little prompting in flying with this project. The subject matter was tangible and purposeful. Some of the children’s grandfathers visited the schools as representatives of Geevor; whilst other children could ask the miners whether their surnames marked them as Geevor descendants. The project also led to meaningful engagement for children’s families as many asked their relatives for memories of the mine. The project, along with the immediacy which mining still holds within these communities, gave the children a real sense of place, a link with purposeful history and a powerful and lasting learning experience.