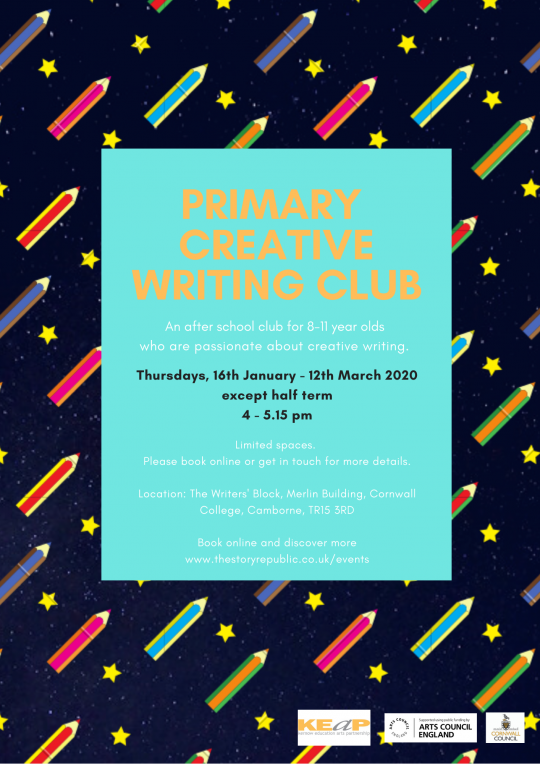 This term we have been continuing to run our Primary Creative Writing after school club. This group meets every Thursday from 4-5:15pm to explore their imagination through arts, crafts, stories and writing. The sessions are run by professional teachers and writers who are passionate about providing space for young people to find their words, discover their talents and have a great time!

Autumn term saw scary stories emerge from Halloween and culminated in a showcase for all the parents. Next term will bring new themes, new adventures and exciting new workshops. If you are primary school aged, or know someone who is that might benefit from these sessions – come along! These sessions are FREE and everybody is welcome, though we do ask that you book online so we can arrange the workshops to suit the group size. Bookings can be made here.

We hope to see you here! For now, enjoy some of last term’s stories…

The Seerios
He watches. He knows. He is a mixture between a dinosaur and a bear and isn’t as friendly as he seems. His habitat? Earth. His enemy? Everything. His alliance? Nothing. How he eats you don’t wanna know but read on if you aren’t sensitive. He lures his victim with the trap of his lovely eyes; they seem so happy and beaming with warmth but that is because he knows soon he will be snacking on human brains and blood. His favourite food is early morning mountain hikers, a delicious a dawn breakfast. . .

The podga-killer lives in mountains.  He is slimy, like a worm.  He screams loudly when he comes out of his mountain in search of food.  When he finds any kind of human (he’s not fussy), he pounces and coils himself around his prey.  Then he drags it back to his mountain to share with his family of podga-killers.

I was walking in town when a huge creature jumped on me from the back!  By its shadow I could tell it was huge and by the trail of stinking slime it left down my shoulders I knew it was disgusting.  I was overcome with fear.  I looked up to the sky but a slobbery drop of saliva dropped on my nose.  I tried to shake it off and as my head turned left to right, I noticed lots of other people struggling to escape from an army of these deadly creatures.  They were dripping their slobbery saliva all over other people too!  I was looking for a way out but I couldn’t find one. I was terrified that my life was in danger. There were lots of other lurking creatures guarding all ways out.  Even the birds were strangled as they attempted to fly away.  I thought that if I stayed still they might let me go, so I went limp and waited …

The Veg Beast and the Fruit Beast

The fruit beast is very scary because he is like a crab who looks like a lobster.

He’s the size of a chair and he’s yellow like a banana with black spots and some red like a strawberry. That’s why he’s called the Fruit Beast.

The Veg Beast has a cabbage for a head which picks up candy and the Fruit Beast only has one eye and he steals candy too. Sometimes they scare you with their crunch. The Veg Beast has a carrot gun which shoots out vegetables and makes people eat them. His other weapons are carrot torpedoes and carrot swords.

The base of the veg beast is a broccoli stalk.