Following in famous footsteps: Young Writers at the Minack

It seems that a change of scene brought out the best in the young writers, as they met at the Minack Theatre for an inspiration gathering session. Given free rein to explore the site, the young people made ample use of this opportunity.

The writing they produced evokes a real sense of place and significance. As one of Cornwall’s most prominent venues, the Minack provides an ideal opportunity for creative minds to flourish.

Having arrived safely, the writers turned their attention to exploring the space and using their reflections to inspire new poetry and artwork.

Engaged in writing from different perspectives, such as that of the Minack Theatre’s founder Rowena Cade or one of the gardeners who helped bring the dream to reality in the early days, those present produced some very evocative pieces of writing.

Ultimately, their task was to gather as much inspiration as possible for future projects that could feed into the work we are doing at The Writers’ Block.

The stunning surroundings of the Minack Theatre meant that their creative minds had plenty to draw upon. As well as writing plenty, they seemed to enjoy having free rein to explore the space and make use of it as they wished.

During the final exercise, the writers drew upon work that we have previously been doing, creating six word stories that summed up their Minack experience.

It certainly seems that the Minack environment brought out the best in the young writers, and gave them an opportunity to explore their creativity in new and interesting ways.

We look forward to seeing what comes of this work during future sessions. We’ll be back at The Writers’ Block in June, no doubt witnessing the creation of more fantastic ideas and worlds.

Written by writer and one of the workshop leaders, Casey Bottono.

Example of a piece created during the ‘six word story’ activity. 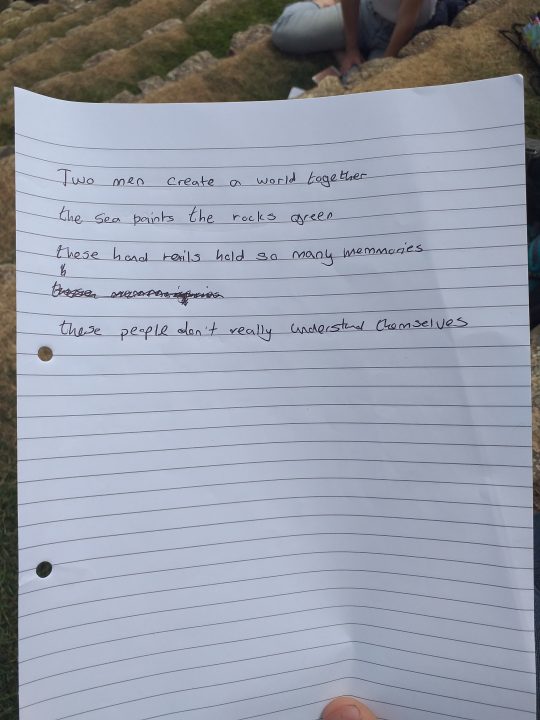